skip to main | skip to sidebar

A quick trip to Walmart IS possible 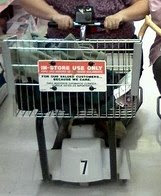 Walmart used to be one of my favorite places to go. Not because I particularly LIKE Walmart, but because they have electric carts and I need one to shop. The problem is that they're not easily available. This means that sometimes I'd park and walk in the store, only to find no cart available. I'd check the parking lot first, and feel like I'd hit the jackpot if there was one out there next to an empty parking space, ESPECIALLY if it was charged and allowed me to do all my shopping before the power ran out.

Yesterday I needed to run in Walmart for a few things to take to my mom today. I didn't have to worry about where I could find a parking space, because even the far out ones work for me. I took the base of my TravelScoot out of the trunk of my car, attached the battery, then attached the seat and I was on my way. A simple trip that would have taken an hour or more before only took about 30 minutes, including assembling and disassembling my scoot.

Independence really IS a wonderful thing!
Posted by Elizabeth at 9:32 AM No comments:

Oh wait. That should read, "Breaking It Down Into TWO Parts!"

I ended up only needing to break my TravelScoot down into two parts for it to fit in my Camry's trunk, and there is oodles of room left. I was able to leave the seat attached to the u-shaped piece. That will be even simpler to reassemble.

I have the lightweight lithium ion battery. It only weighs 6 pounds. I'll carry that separately, because I don't want to leave it in the trunk. It's not supposed to be exposed to high heat, and living in Louisiana, that's just about all we have. I'll keep the battery in a padded bag and keep it in a cooler environment, like my office.

My understanding is that if I had the sealed lead acid battery (SLA), I could leave that battery in the trunk. It's a LOT heavier though, and doesn't carry as much of a charge.

Hardy Huber explains the batteries much better than I can. It's on his website, at http://travelscoot.com/batteries.htm.
Posted by Elizabeth at 9:54 PM No comments:

We have two vehicles. One is a Honda Odyssey minivan, which my husband normally drives. My TravelScoot easily fits in the back without taking it apart. Our other car is a 2004 Toyota Camry. It's what I usually drive, and I want to be able to carry my scoot in it. What I'd been putting off was learning how to take it apart to put it in the trunk.

Today was the day.

I watched Hardy Huber's video several times (http://travelscoot.com/demonstration.htm). He makes it LOOK easy, but this isn't the type of thing I'm good at.

It took about thirty seconds. Amazing!
Posted by Elizabeth at 2:52 PM No comments: 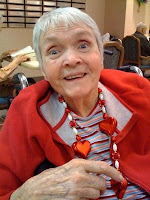 Today I took my TravelScoot to Sam's Club. I didn't have to worry about finding a close spot, because I could park anywhere and scoot in. Hooray! I wasn't sure how I was going to handle needing a buggy, but what I ended up doing was trying it out in the parking lot first. I rolled up to a buggy to see if I could roll it beside me. I was able to do that by just holding onto the front of it. In the store though, it worked even better. There was enough room in many places to roll it beside me, but because the scoot is so small, I was able to drive with my right hand and pull the buggy BEHIND me, using my left hand. Sometimes I just left it sitting and went off to get whatever I needed, then came back and put it in the cart. This might not work so well during a holiday shopping time, but it worked great on a Sunday afternoon. I was in and out of Sam's Club faster than I've ever been.

On the TravelScoot website I saw a testimonial from someone who had actually hooked a grocery cart onto the back of her scoot using a bungee cord. Hard to image, but after today I know it would work.
After Sam's Club I went to my mom's nursing home to deliver supplies for her, and a big bag of chocolate. I left my scoot in the car for that. You know, there is just nothing like seeing the look on my mom's face when she sees me walking in. She may not remember where she is or what year it is, but she knows who I am.
Next was a trip to the grocery store, where I used my Target shopping bag and hooked it over the left handlebar.
I did all that and was back home in about 2 1/2 hours, which is much faster than usual for me!
Posted by Elizabeth at 11:06 PM No comments:

I've had my TravelScoot for 3 days now, and have learned a few things.

Mama, it's a rocket!

Today I picked up Melissa and Greg and we went to Target, another place I haven't been able to go lately. Actually Target does have electric scooters for their customers to use, but (at least the stores in Baton Rouge) do not maintain these scooters or charge them as needed. They are most often broken or have a dead battery, or strand you not long after you start using the cart.
Melissa was in the dairy section and I wanted to get a car charger for my cell phone, which is all the way across the store. Okay, maybe I drove a BIT too fast, but I was having so much fun. Until I passed a little boy with his mom, and he pointed to me and said, "Mama, it's a rocket!"
Posted by Elizabeth at 11:33 PM No comments: 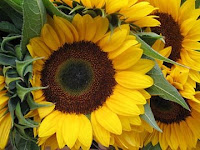 Saturday Alan and I went to Fresh market, a store I haven't shopped at before because they didn't have electric carts. While I was there I learned a neat TravelScoot trick. I got one of their reusable grocery bags and looped it over the left handlebar, and used it for grocery shopping.
Best Buy was our next stop. I really expected people to stop me and ask about the scooter, but so far it seems only the children are noticing it, and they think it's COOL.
Posted by Elizabeth at 11:20 PM No comments:

Did I mention it only weighs THIRTY FIVE pounds? 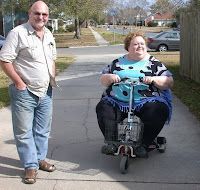 The man on the left side of the photo is Hardy Huber, who I'm starting to think is a genius. At the very least, it makes sense to use a product developed by someone who uses it himself!

Hardy told me that the TravelScoot was inspired by his need to have a scooter he could carry on a plane he was piloting. He puts about 2500 miles a years on his.
Posted by Elizabeth at 11:23 PM No comments: 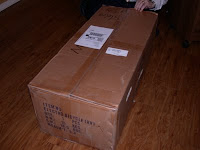 If you buy a TravelScoot, you too can get a box delivered that says "Electro Bicycle" on the side of it. Doesn't that sound less medicinal than "Mobility Scooter"?

Tonight Melissa went with me to visit my mom at her nursing home, and we took my scoot in with us so I could show it to her. Mama was in bed and while we were talking (and laughing) and putting on lotion, Melissa was scooting up and down the halls of the home ringing the bell. Mama was laughing and saying "beep beep, beep beep!"

Melissa and I had loaded baked potatoes at TJ Ribs afterwards, and then took my scoot on a trial run to Walgreens. I only almost took out one person, and he shouldn't have darted out in front of me.

The scoot handled things well, even the two sidewalk ramps. I'm not sure that wearing a long dress was the best idea though, because I kept getting it caught on things. I think the belt may need to be tightened. Alan's going to look at it in the morning.

It's a good idea to heed the warning in the manual not to push the battery connector together too hard. Alan ended up using lubricant and a pair of plyers to get it loose. He is the one who connected it and he obviously doesn't know his own strength!

Lifting it in and out of the van fully assembled was so easy. Attaching the basket, however, requires reading the instructions and not waiting until you're standing in a dark parking lot to put it on. God bless Melissa for putting up with me. :-)
Posted by Elizabeth at 11:08 PM No comments:

Have you been sniffed today? 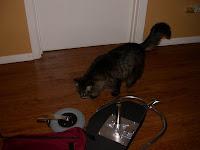 This is our cat Enotris, checking out the scooter. Of course she has to sniff anything new that comes into the house. She hasn't curled up in the bag yet, but give her time.

Oh! I'm wanting a clever name for my scooter. Something that makes you think "Mighty and Small". It's a girl.

If you'd like to see the manufacturer's website for the TravelScoot, it's at http://www.TravelScoot.com. I have no affiliation with the company, I'm just excited to be trying one out. I've been looking for (and dreaming of) something like this for years.

To me it means INDEPENDENCE.
Posted by Elizabeth at 12:33 AM No comments: 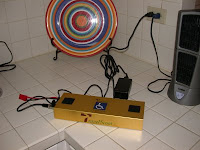 The first thing we did was set up the lithium ion battery to charge. It didn't take long to charge it the first time. It was easy to charge.
I've never had a battery before than came with an owner's manual. It's high tech!
One thing to note: You need some strength in your hands to put the TravelScoot together. It's not difficult to do though. There wasn't even any cursing involved.
Posted by Elizabeth at 12:25 AM 2 comments: 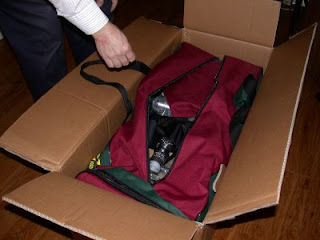 Today my TravelScoot arrived. Hopefully you're already familiar with the information at http://www.travelscoot.sizepositive.com/, so you know the background.
We didn't have any trouble assembling it, and charging the battery didn't take long. I think it needs some adjusting though because it's not operating exactly like the one I tested. When I start it going it vibrates for a few seconds, then once it gets going it's fine, but every time I stop and start it again it does the same thing.
I've sent an email to Hardy Huber. Hopefully he'll have a good suggestion for me to try.
This picture is what it looked like when we opened the box. The only thing that Alan had already taken out of the box was the baskets.
UPDATE: The vibration problem was caused by the throttle having a built-in delay. Hardy sent a throttle with no delay, Alan installed it, and I haven't had a problem since. Now when he ships a TravelScoot to a larger person, he makes sure the throttle has no delay.
Posted by Elizabeth at 10:11 PM No comments: